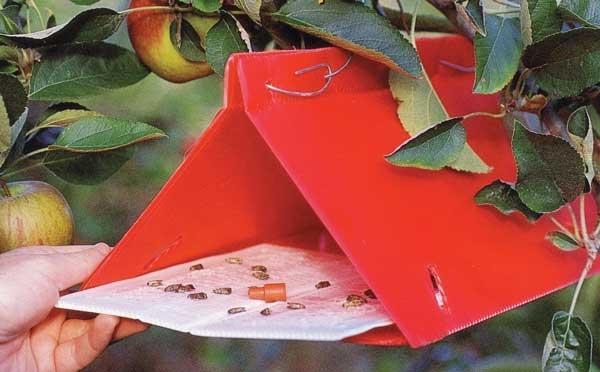 Codling moth traps will soon be hung in apple orchards in the Pacific Northwest. Now is a great time to refresh your knowledge on how to look out for this pest.

Suterra offers several effective options for monitoring codling moths. If you are not using mating disruption, Suterra’s CM 1x Biolure is the ideal product for your orchard. 1x contains the standard amount of pheromones that have historically been used to monitor codling moth populations.

In orchards where mating disruption is used, you will have to use more highly concentrated products (often referred to as high-load lures). The CM 10x Biolure has a much higher load of the pheromone (codlemone) than the 1x, and is therefore strong enough to attract male moths even in the presence of mating disruption.

If growers using mating disruption don’t wish to use Suterra’s 10x Biolure, codling moth male and female lures (often referred to combo lures) are available in the market. Rather than dispensing a high load of pheromones to attract more male moths, these lures contain codlemone and an added attractant (a pear ester plant volatile) and catch both male and female moths. Both high-load and combo lures can be used in conjunction with Suterra’s Checkmate dispensers and Puffer pheromone solutions.

Even when using high-load or CMDA lures to track populations in an orchard under mating disruption, you should deploy some traps using the 1x Biolure. The 1x Biolure acts as a reference to indicate that mating disruptants are working in the orchard. If a significant number of male moths are still showing up in 1x traps in the presence of mating disruptants, you may want to double-check that your mating disruptants have been properly deployed and may request assistance from the manufacturer to evaluate the issue.

Suterra offers a Large Plastic Delta trap (LPD) to monitor codling moths. After assembling the trap itself, users simply need to slide the grid-lined sticky liner into the trap’s bottom and adhere the Biolure packet to the inner wall of the trap. Once the protective cellophane layer has been peeled from the Biolure, the trap will begin emitting pheromones and attracting moths.

You should hang traps before the first moth emergence is anticipated (usually the first moths will appear in March or April). At the very latest, they should be placed before the pink stage of apple flower-bud development. The traps should be hung in the top third of the tree canopy away from any obstructive branches or leaves, and should be distanced from any mating disruption products present in the orchard.

Traps should be checked weekly for codling moths. There is no set date on how often the sticky linings should be replaced, but anyone checking the trap should make sure that they are still sticky and replace them if they are not. Biolures need to be replaced every eight weeks and should be kept in cold storage prior to use.

Apple growers should also conduct visual examinations of their fruit to identify the extent if codling moth activity. Apples should be thoroughly inspected at least three times per year; at the end of the first generation, in July, and before harvest. An inspection should include at least 30 to 40 fruit from 40 trees per every 10 acres of orchard. Codling moths prefer the upper half of trees so you should prioritize samples from this section.

Codling moth larvae cause two main types of damage to apples, both of which make the fruit unmarketable. ‘Stings’ occur when larvae shallowly burrow into the fruit before dying or leaving for another location. On mature apples, you may notice a reddish ring around the site of a sting. ‘Deep entries’ occur when the worm burrows all the way to the core of the fruit. Deep entries are particularly concerning because they provide a breeding ground for bacteria and fungi, potentially causing fruit rot. Deep entries are distinguishable from stings by the presence of brown frass (worm excrement) around the entry site on the fruit. 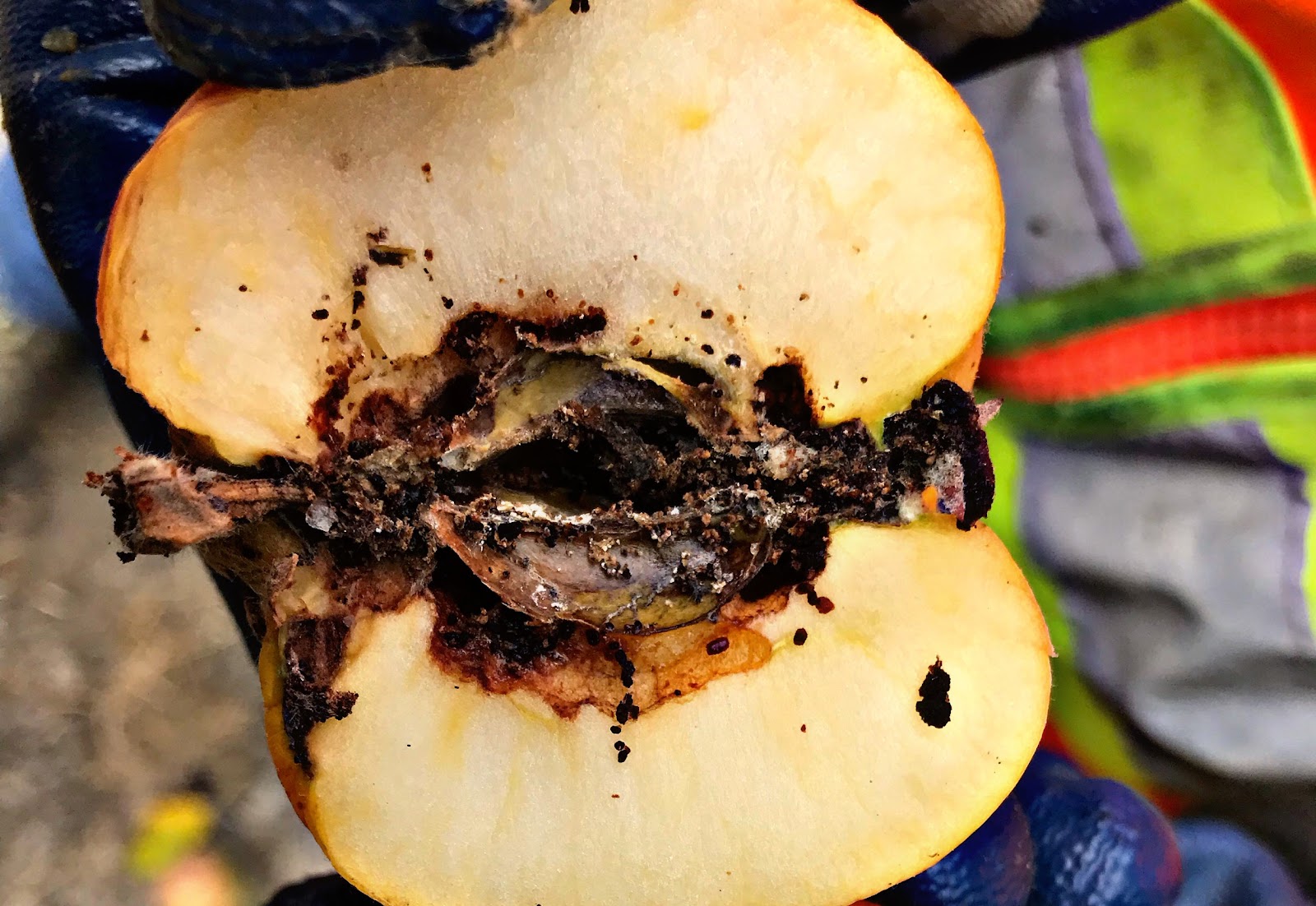 The image above shows a cross-section of an apple damaged by codling moth larvae.

While codling moth adults are fairly unremarkable-looking at a first glance, they have several distinctive characteristics that can help growers separate them from similar species. The most noticeable characteristic on a codling moth is the reflective coppery band of scales on the end of their wings. The rest of their wings are a mottled brown-grayish color. They are roughly ½- to ¾-inch in length and keep their wings tented over their bodies when resting.

Growers using CMDA lures may want to differentiate between male and female codling moths. Telling the difference between sexes is often possible with the aid of a hand lens. Males have thin, black hairs on the underside of their forewing, and the tip of their abdomen is colored differently than the rest of their body (pictured below). 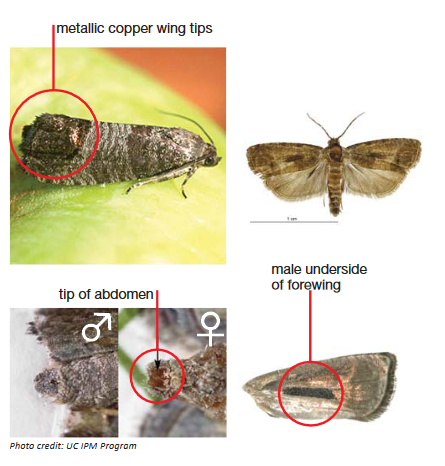 Metallic copper wing tips are present on both sexes.

If you find a significant codling moth population in your orchard, you should consider taking action. In general, growers should adopt management methods when more than 0.5% of their fruit shows signs of codling moth damage. If you aren’t already using mating disruption, you may want to consider adding this technology to your pest management program. Mating disruption inhibits the male’s ability to find female mates, and years of research has shown its effectiveness in reducing populations and damage.

If you have inquiries about monitoring methods or mating disruption, Suterra is happy to help. Contact your local representative or contact us with the email form provided here.