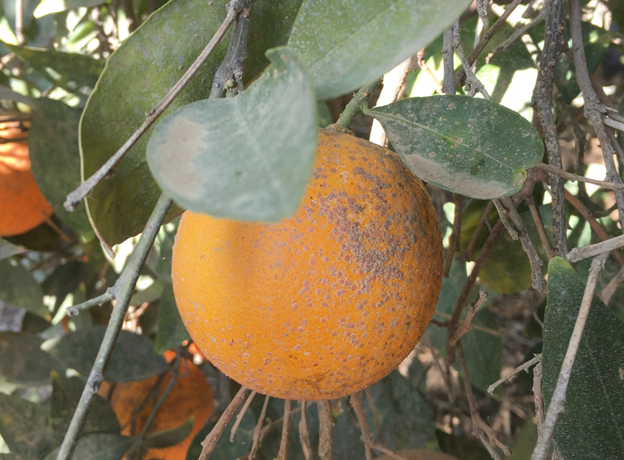 Adult female and juvenile California red scale (CRS) are hardly recognizable as insects, resembling something more like miniature barnacles on plants, while adult males look like more typical insects with legs, wings, and antennae. Adult females have a flat, rounded cover that attaches to the leaf, wood, or fruit. Females remain under this cover throughout their entire lifespan, feeding using piercing-sucking mouthparts, and typically produce approximately 100 to 150 offspring per female.

When females are ready to reproduce, they emit a sex pheromone that lures males to her immobile body. Eggs are contained under the female scale cover and the first juvenile stage, known as crawlers, emerges from beneath the female. Crawlers typically move short distances on their own before settling on plant tissue to feed and grow. Longer distance spread of crawlers occurs via wind, birds, or farming operations (equipment or crews).

CRS can cause damage to all varieties or citrus, including oranges, mandarins, lemons, and grapefruit, among others. The pest will feed on all parts of a citrus tree, but damage is typically most impactful due to downgrades of infested fruit at the packinghouse, reducing crop quality and value to the grower. High populations may also damage trees, causing leaf yellowing and drop, as well as twig and limb dieback. Uncontrolled, severe infestations can lead to plant death.

Growers in California have been fighting CRS in their citrus groves since it was unintentionally introduced the mid-1800s. The pest has developed resistance to all of the broad-spectrum conventional pesticides used to combat this pest. Resistance to more selective chemistries, such as insect growth regulators, is also reportedly increasing in recent years.

As a result, the importance of a comprehensive integrated pest management (IPM) strategy is emerging as the best approach to minimize losses caused by this pest. Biological control agents, such as parasitoid wasps, in combination with other IPM tactics have shown significant success. However, necessary insecticide applications to limit the spread of Asian citrus psyllid (ACP) can limit the efficacy of biological control. 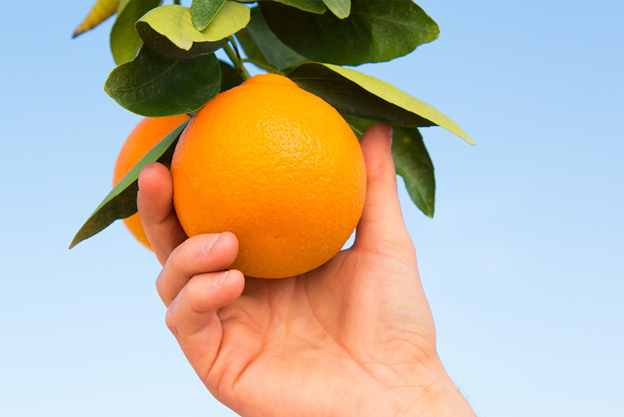 CRS can be difficult for to control due to the high reproductive capacity and limitations concerning the efficacy of insecticides and biological control. Fortunately, innovative companies like Suterra have created effective long-term solutions for this pest and many others. Suterra’s mating disruption products offer a unique solution to reduce pest populations and damage.

Adult female CRS are immobile, and adult males are very short-lived. As a result, the sex pheromone emitted by females is critical for reproductive success. Suterra’s CheckMate® CRS dispensers  disrupt this process by releasing identical copies of the pheromone produced by females. When mating disruption pheromones are dispersed in a citrus orchard, males cannot locate females normally, resulting in significant reductions in populations and damage. CheckMate® CRS mating disruption dispensers are species-specific, and therefore safe for natural enemies, pollinators, and humans, and are approved for use in organic systems.

CRS is a primary citrus pest and control can be challenging. By using an IPM strategy incorporating Suterra’s CheckMate® products, growers can limit the impacts of this pest and maximize their crop quality and profits.