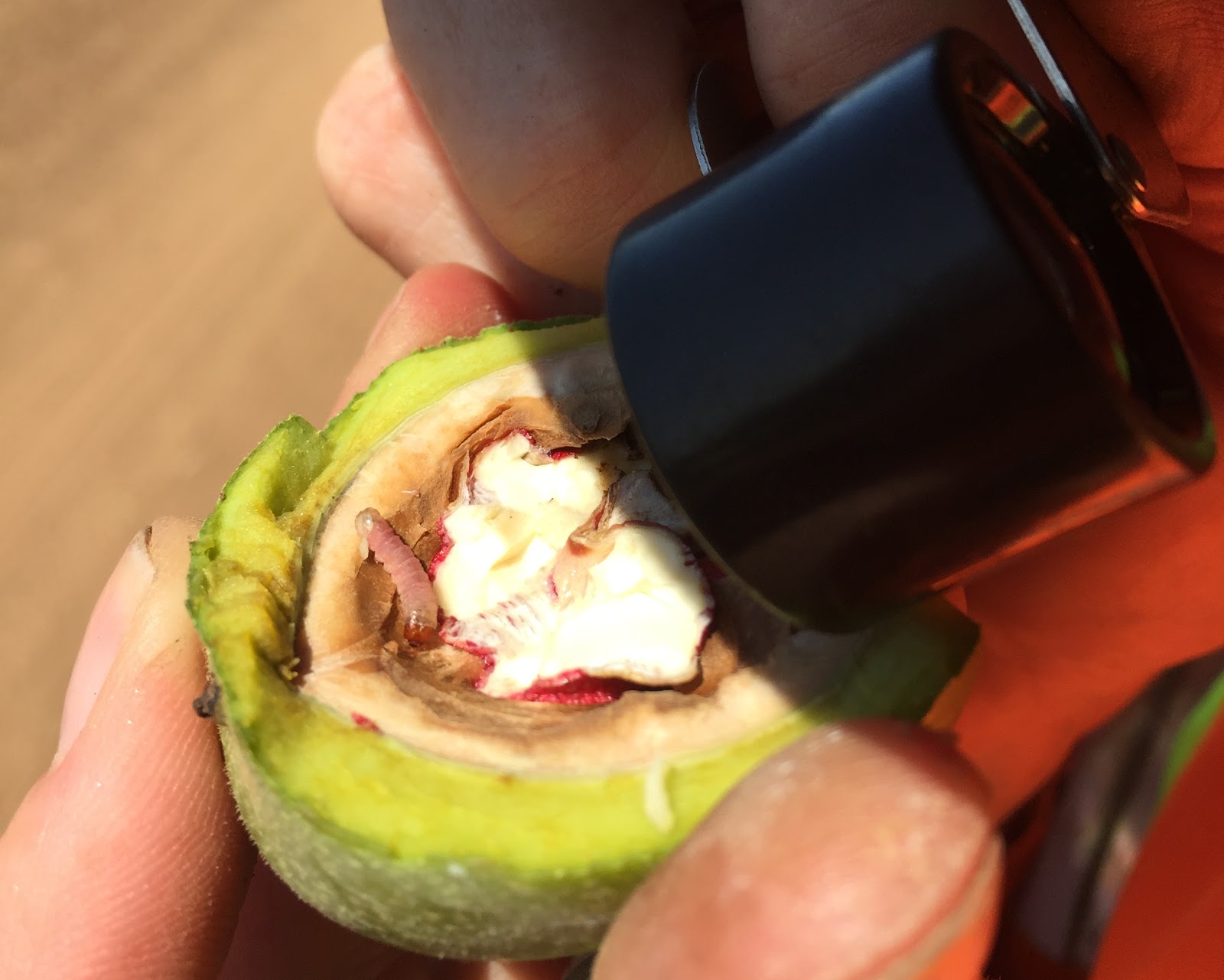 As March approaches, traps to monitor the first codling moth flight will soon be placed in walnut orchards. Below are some reminders of best practices for monitoring and managing this pest. 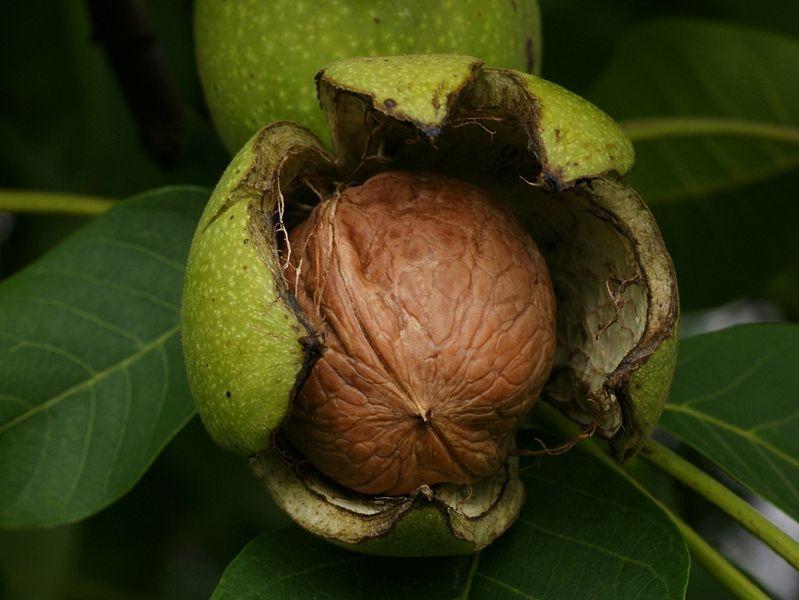 Growers and their Pest Control Advisers (PCAs) who are monitoring codling moth activity in their walnuts will have to decide on which lure they want to use. Suterra’s CM 1x Biolures are the best option for orchards not under mating disruption. These lures contain a standard amount of codlemone, the female sex pheromone, which will lure male moths into the delta traps.

Monitoring becomes a bit trickier in orchards that use mating disruption, as the pheromones being emitted from mating disruptants will overpower the effect of standard lures. Some growers use CMDA lures (also referred to as combo lures) which include a combination of the sex pheromone and an attractive plant volatile (pear ester). CMDA lures attract both male and female moths, so growers will still get catches in orchards using mating disruptants. Suterra also offers a CM 10x Biolure, which contains ten-fold the concentration of the 1x lure that attracts males and can therefore be used in MD orchards to track population cycles.

You should still deploy some CM 1x traps in mating disruption orchards where you are primarily using 10x or CMDA lures. The 1x traps should catch very few male moths and therefore can serve as a reference to indicate that your mating disruptants are working as expected. If you are still catching a significant number of codling moths in 1x traps in an MD orchard, you should check to make sure you have deployed your mating disruptants properly and may request assistance from the manufacturer to evaluate the issue.

Setting up the trap is easy; you simply need to unhook the wire, fold the trap into the pictured triangular shape and insert the liner and Biolure. Adhere the Biolure to the interior top wall of the trap and remove the protective cellophane layer from the packet to activate the pheromone. To finish off the trap, bend in the flaps on the trap bottom to give the frame some extra stability and ensure that the liner will stay in place. 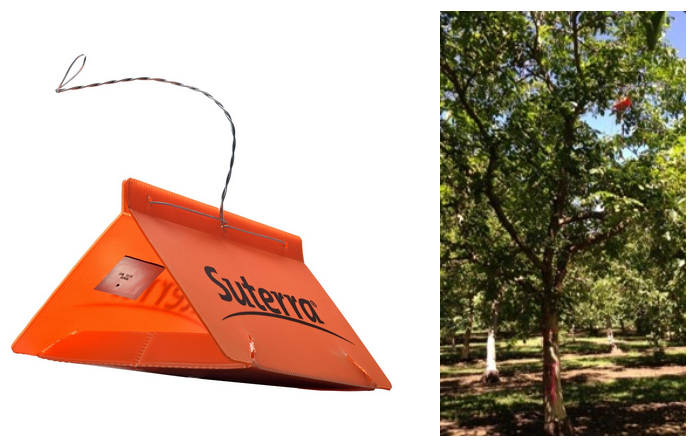 LPD traps like the one above are hung high in the canopy of trees, often using a rope system.

Traps should be placed at bud-break, which is often around the first week in March. The traps should be hung at least at mid-canopy in the tree. As a general rule, you will catch more moths if you hang traps higher in the tree canopy, so you may want to hang traps high (top third of the canopy), particularly in orchards with low moth populations. Deploying traps on a simple rope system greatly facilitates weekly trap checks and, once in place, durable ropes can last multiple seasons.

Once deployed, traps should be checked frequently to determine the first biofix. From there, you can use the degree-day model specific to walnuts to help time treatments and estimate when subsequent flights will occur. Traps should be checked at least weekly throughout the season to monitor the population cycles. More information on how to use the degree-day model is available on the UC IPM website.

In addition to trapping, you should routinely check your walnuts throughout the growing season for any damage caused by codling moth. Conduct these checks after every generation of codling moth and at harvest. A combination of dropped nut and canopy counts are used in-season to estimate the population pressure and help with treatment decisions. Each check should consist of at least 1,000 individual walnuts. During the growing season, space this out among 50 trees (which amounts to 20 walnuts per tree). At harvest, collect and crack 1,000 walnuts, taken evenly from throughout the orchard to identify sources of damage.

Codling moth larvae bore into the nut and feed on its kernel. The first generation of moths bore into the nutlets on the blossom end and may cause smaller nuts to fall from the tree. Later generations will readily burrow in anywhere on the nut’s surface, and entries are often seen at the contact point between two nuts. A tell-tale sign of codling moth activity are “chimneys” of brown frass that the larvae excrete while feeding, which are often visible externally around the entry point. 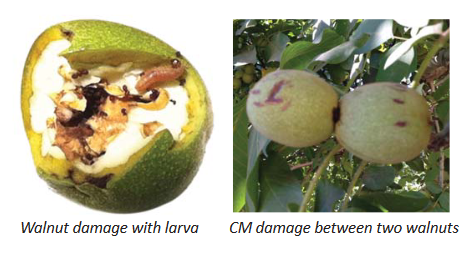 An important part of the visual damage checks is ensuring that any larval damage caused to walnuts was actually caused by codling moths. Codling moth and navel orangeworm (NOW) are both common pests of California walnuts and can be mistaken for each other, but there are several key differences between the two.

Navel orangeworms have C-shaped markings behind their head which codling moths lack. In addition, multiple NOW larvae will sometimes feed on a single kernel, whereas there is typically only one CM larva per nut. Codling moth damage assessed at harvest can be masked by NOW damage, as NOW will often infest nuts already impacted by CM. These compounding factors of NOW infestation underscore the importance of a good CM management program, as well as in-season CM damage assessments.

Learning to identify adult moths is also important, and it’s possible also to distinguish between male and female moths if you are using combo lures. You can learn more about identifying adult codling moths in our article about codling moths in the Pacific Northwest.

If you discover evidence of a treatable codling moth infestation, you should take action as soon as possible. Codling moth populations can rapidly grow; if 1% of your nuts show signs of infestation during the first generation of moths or 2% after the second generation, you may lose up to 5% of your nuts to CM at harvest if you don’t manage the population. The UC IPM website offers much detail regarding treatment thresholds at each generation.

The use of mating disruption is a well-validated method for reducing codling moth damage to walnuts. Suterra’s mating disruption products utilize the same pheromone present in CM Biolures, dispensing it into the air and impacting the ability of male moths to find mates. Mating disruptants are species-specific, and therefore have no non-target impacts on beneficial natural enemies, pollinators, and are safe for the environment and workers.

If you have questions about monitoring or mating disruption, Suterra is happy to help. Contact Suterra with this form or contact your local representative.