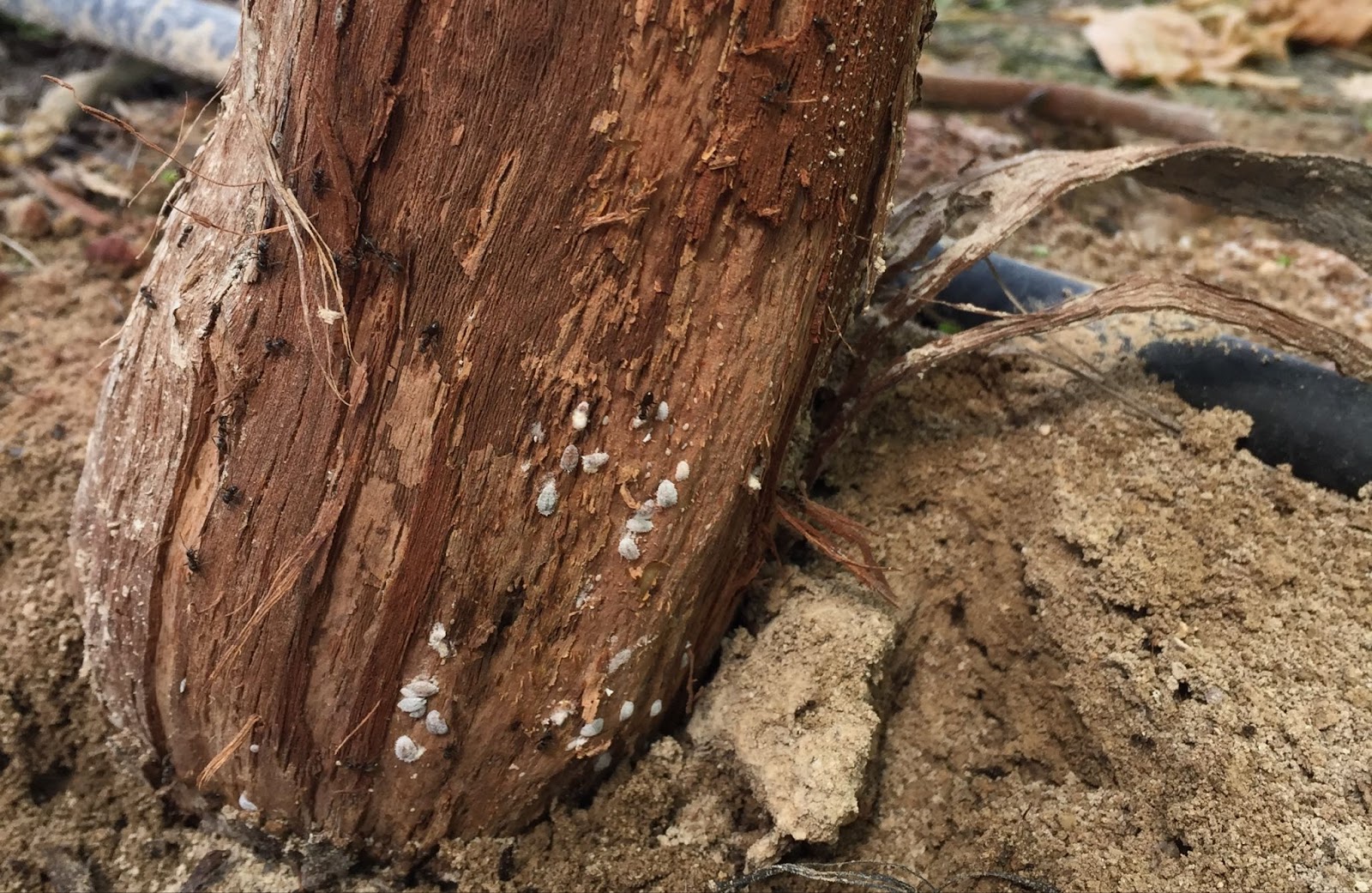 Vine mealybug can cause permanent damage to vineyards if left unchecked, yet can be easily misidentified with several similar pests. Learn about mealybugs and how to distinguish vine mealybugs from other species in this article.

The vine mealybug is a member of the mealybug family, a group of insects that rarely get attention outside of the gardening and agricultural sphere. Like other mealybug species, vine mealybugs exhibit extreme sexual dimorphism, meaning that adult males and females are extremely different from one another in appearance and habit. All mealybugs start out as crawlers, develop through multiple instars or stages of growth, and finally mature into their adult form. 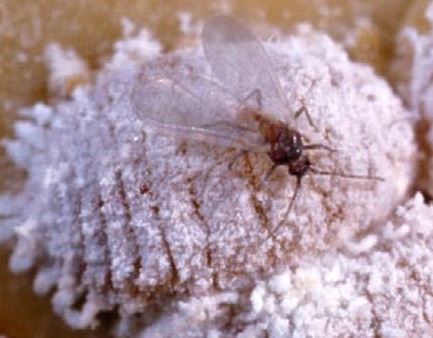 Mealybug females are mostly immobile, only traveling short distances from their birthplace. Adult females are small (~⅛ inch) segmented oval-shaped insects with a waxy coating that gives them a dusty off-white color. Under the coating, their body is a light peach hue. Adult males are much smaller, have wings, and only live for a short period of time in their adult form. Mealybugs will congregate in clusters under the bark of vines during winter and move to all parts of the plant in spring. The insects also often form symbiotic relationships with neighboring ant colonies, so you may want to scout for mealybugs if you notice an uptick of ants in your vineyard, as well as monitor for ants to help locate vine mealybug infestations.

Because of their size and short lifespan, you are unlikely to see male mealybugs outside of pheromone traps specifically designed to lure them in. However, you should still ensure that any trapped males are actually vine mealybug. VMB males are very tiny (¼ inch long) brownish insects with a single pair of wings, a wide thorax and visible caudal setae. 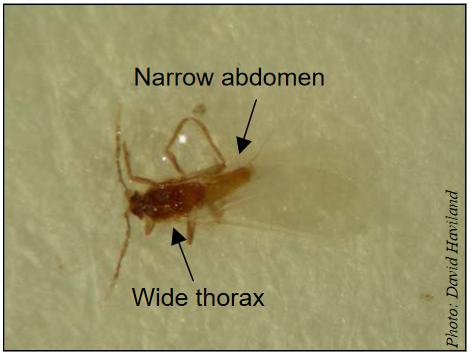 Vine Mealybug vs. Other Mealybugs

Several species of mealybug regularly feed on plants in the California valley. While the species look superficially similar, they have different life cycles and henceforth require different measures and timings of control. Vine mealybug is an invasive species and, where it has spread, is the most damaging of the three common vineyard mealybugs.

Crawlers of different mealybug species are extremely difficult to distinguish without genetic testing. However, adult females of the three common mealybug species can usually be identified by a trained eye.

Grape mealybugs have several identifying characteristics that you can use to distinguish them from vine and obscure mealybugs. The body of adult female grape mealybugs is shaped differently than vine mealybugs. Grape mealybugs are somewhat more elongate and rectangular in shape. They have less uniform waxy filaments surrounding the body and two long filaments at their rear end, giving the insects the appearance of having somewhat longer ‘tails’. In contrast, vine mealybug has a more oval body shape, with thick and uniform filaments, and very short ‘tails’. 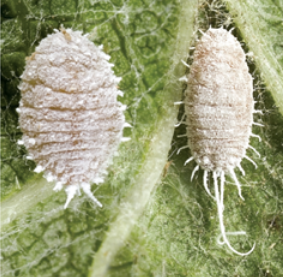 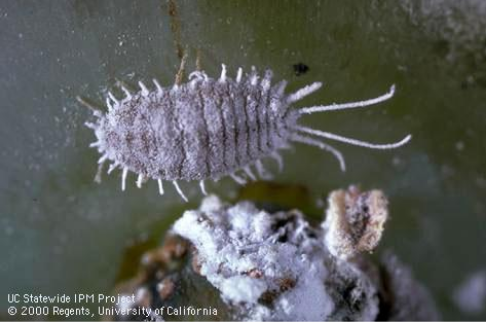 Growers in the various growing areas of California may also encounter longtailed mealybugs. Longtailed mealybug adult females can be easily identified by the extremely long filaments on their rears, which are generally as long or longer than the body of the insect.

Vine Mealybugs can usually be distinguished from these other mealybugs by their short ‘tail’  filaments, smaller size, and more oblong shape. Another telltale sign of this pest is the excessive amount of honeydew they produce. Vine mealybugs often produce enough honeydew that their excrement serves as a conduit for sooty mold fungi, which blackens affected areas of the plant. 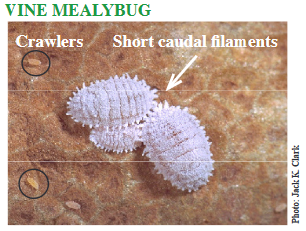 Suterra’s mating disruption products effectively and safely cut down VMB populations by imitating the mating pheromone of the female mealybug, ‘blinding’ males to potential mates. As a result, the males die without reproducing, preventing the next generation.

Mating disruption is species-specific, so beneficial insects won’t be affected. The pheromone is also completely safe and leaves no pesticide residue on grapes. Suterra offers mating disruption for vine mealybug in two forms: CheckMate VMB-XL and Checkmate VMB-F. The former is a dispenser that can be easily hung on vines to emit pheromone, while the latter is in liquid form and can be applied just like any spray to emit the pheromone.

If you have questions about vine mealybug identification, mating disruption, or integrated pest management, the experts at Suterra are happy to help. Contact your local representative or email us using this form.

Information provided herein does not constitute a recommendation. Always consult with your PCA to determine the best pest management practices and timings for your operation. Adhere to state and local regulations and the current pesticide label and check with your organic certifier.