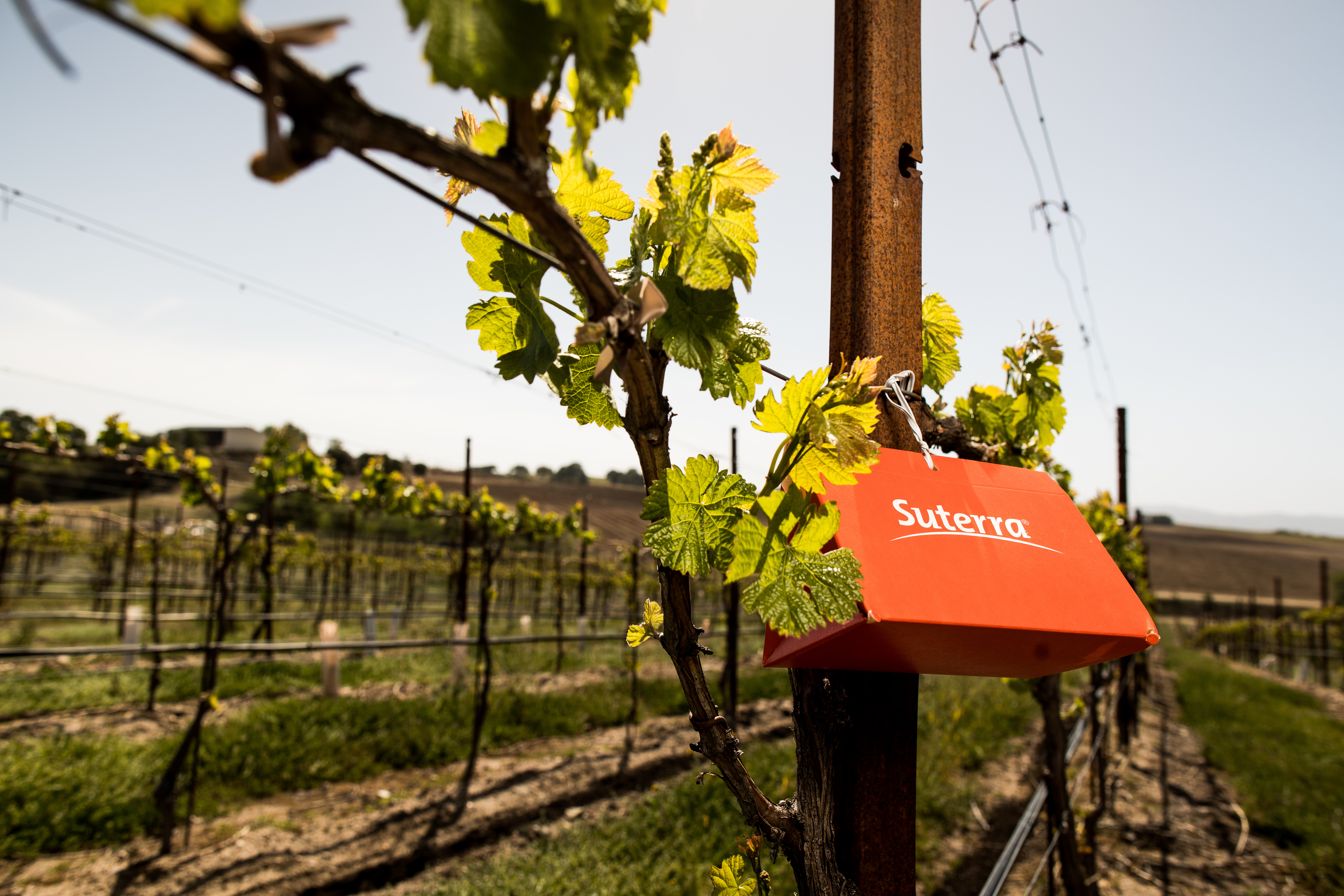 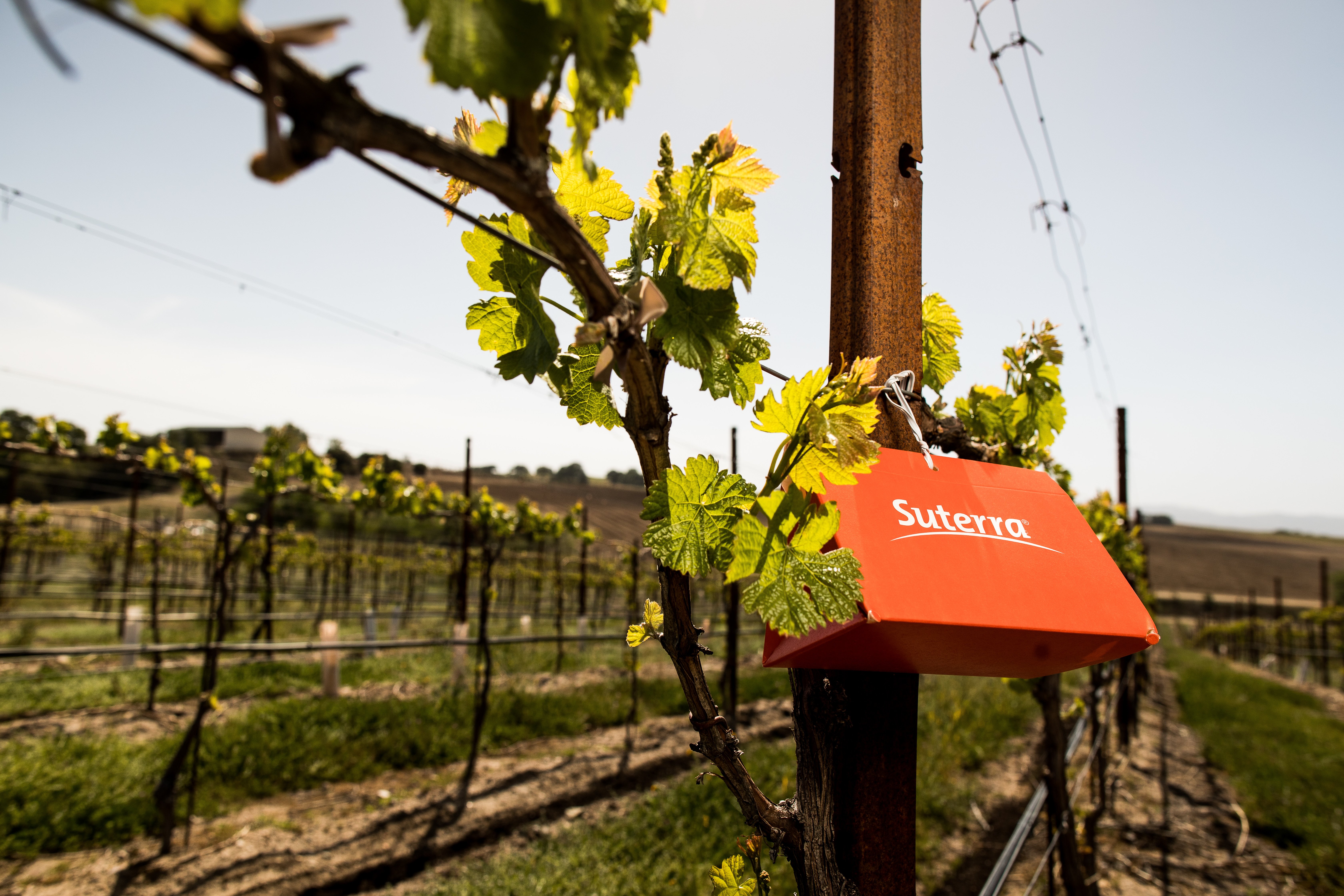 When vine mealybug (VMB) populations first invaded the vineyards in Lodi, California, many farmers treated it as a shameful secret to be kept from their neighbors. While no one wanted to have it, VBM presented a seemingly harmless problem. The viticulture industry had bigger pests to fry.

During this same period, the glassy-wing sharpshooter was spreading Pierce’s disease, caused by a bacterium that critically damaged grape leaves, fruit, and vines. With all eyes on the sharpshooter, few paid attention to the pest lurking under the bark and below the soil.

“At the beginning, vine mealybug was an embarrassing thing to have,” says Aaron Lange, Vice President of Vineyard Operations at LangeTwins Family Winery and Vineyards. “You didn't want the neighborhood to know that you had vine mealybug because it wasn’t well-understood. That was a real sociological and psychological problem that we had as a community, it was taboo to talk about it openly. Growers were reluctant to look for it, to identify it, and to recognize when they had it. So, vine mealybug spread very quickly because we weren't trying to eradicate the problem.”

The VMB in California Origin Story

VMB was first documented in California’s Coachella Valley in 1994 when, according to the UC Riverside Center for Invasive Species Research, it likely spread via contaminated nursery stock and field equipment. VMB began to wreak havoc on Lodi-area vineyards in the early 2000s. Two decades later, pest management remains a serious challenge.

“Vine mealybug has proven to be one of the toughest, most resilient and quickly spreading insects that we've ever seen in viticulture in California,” Lange says.

LangeTwins grows 20 different grape varieties across four counties and has been doing so for five generations. The family-owned-and-operated business manages the vineyards and grape production for its own label and others. LangeTwins has dealt with many pest and disease problems over the years. Few have been as damaging as an out-of-control VMB population.

Aaron Lange has seen firsthand how VMB not only impacted his family’s business, but the entire region’s ability to produce a quality crop. Although pesticides have been able to keep this pest in check and limit the damage it does to make the crop unmarketable, the biggest problems occur when VMB vectors leafroll 3. The virus cannot be cured and is with the vine until the end, weakening it and causing fruit ripening issues.

This inspired him to organize a vineyard alliance for Lodi-based farmers to join forces with the goal of eliminating VMB—something that would be nearly impossible to achieve alone.

“One of the most important factors to keep in mind with vine mealybug is that it does not respect borders whatsoever,” Lange says. “If a population gets established in one vineyard, it can easily spread into the next vineyard, either blown by the wind or moved by birds or by humans with farm equipment. So, it's not just your problem in your vineyard, but it's your neighbor’s problem and your neighborhood’s problem.”

Why VMB is Just the Beginning

In addition to being easily spread, VMB is incredibly resilient. It hides in the bark of the vine and can overwinter in the soil, which means a single pesticide spray will not be 100% effective. VMB can also have up to eight overlapping generations in a single season. The biggest challenge with VMB, however, is not necessarily the pest itself, but what it brings with it.

VMB boasts a lot of baggage. Its symbiotic relationship with Argentine ants, for example, increases the reach of both pests. VMB produces a sweet secretion that the ants consume. Because the ants want to feed and grow their populations, they will move vine mealybug sacs to different areas of the vineyard, thus spreading VMB’s overall presence and creating more food.

VMB is also a vector for Grapevine leafroll-associated virus 3 (GLRaV-3 or leafroll 3), a problem that inhibits fruit ripeness and weakens the vine enough for opportunistic pathogens to come along and finish the job. The combination of VMB and leafroll 3 are believed to contribute to Sudden Vine Collapse, a devastating disease that cuts off the pathway from the rootstock to the vine where water and nutrients are transported, eventually resulting in death. While each problem is challenging on its own, all roads lead back to VMB: stop the pest to save the vine.

“It’s negative all around,” Lange says. “ Over time, VMB starts interacting with other viruses and other pathogens, and because it’s such an aggressive vector, we’re actually seeing it kill entire vineyards over time.” 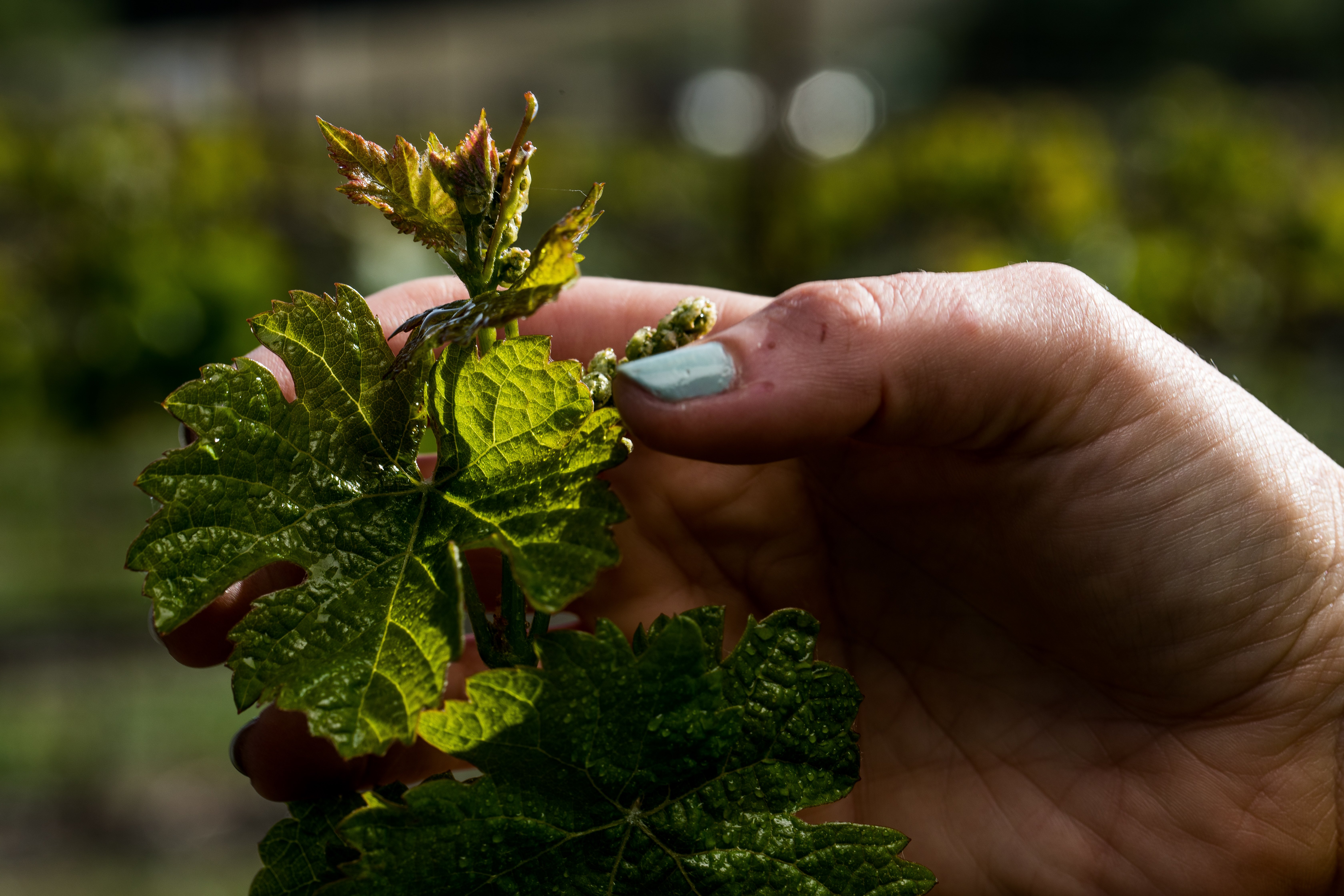 The Search for Effective Solutions

As with most pest problems, the effort to curb the spread started with pesticides. Initially, Lange says, the only effective option was organophoshate (trade name Lorsban), a chemical that has since been banned in California agriculture. As lower impact materials became available, growers used those to control the pest. Things changed dramatically when farmers realized the connection between VMB and leafroll 3. The focus turned toward pheromone mating disruption because simply knocking back the population with pesticide control was not enough to stop the spread of leafroll 3 virus. An integrated approach was needed to further reduce the populations the virus vector—some materials require the insect to ingest the pesticide in order to kill it—but by that time, the virus has already been transferred into the vine.

“Growers in California have successfully used pheromones to manage other pests in the past,” Lange says. “There’s a really good track record of using pheromone mating disruption as a way to limit or eliminate population of XYZ pests in other crops.”

Lange and his neighbors in the Lodi area worked together to map the VMB populations in the vineyards, shining a light on precisely how aggressive VMB was spreading leafroll 3. Something needed to be done—and fast.

“We realized, ‘hey, we need to deploy all the control methods that we can to manage this insect,’ and that included pheromone mating disruption,” Lange says. “We reached out to Suterra, and they were very cooperative and provided traps to monitor the mealybug males in our area.”

CheckMate VMB-XL, Suterra’s long-lasting mating disruption dispenser for VMB, works by releasing pheromones into the vineyard through an easy-to-use hanging product. Once released, the pheromones saturate the air, preventing the male pests from finding pheromone-emitting females with whom to mate. Because the pests aren’t able to reproduce, the population declines. The Lodi farmers deployed approximately 1,500 acres worth of pheromones in 2020 and tracked the results over the course of the season.

“We saw a very positive result,” Lange says. “When pheromone dispensers were applied, we saw the male populations in our traps drop dramatically. We see that as an indicator that the males can’t find the females and that the overall population has dropped as well.”

The Future of VMB Control

While Lange knows that no one tool will provide a silver-bullet solution to such a pervasive pest problem, he views mating disruption as an important part of the VMB management toolkit that includes low-impact pesticides and other biological controls.

There are other considerations as well. When a small number of chemical solutions are available, the potential for resistance issues is greater. Legislation that threatens to further restrict neonicotinoid use limits the available options even more. Managing VMB and the issues it exacerbates will require an integrated pest management approach.

“If we can do a one-two punch by reducing vine mealybug populations naturally with pheromone mating disruption and then use a very low-toxicity, low-impact material to hammer it during the growing season, that would be fantastic,” Lange says. “Ultimately, I would love to see pheromones on every acre and in every vineyard in California because I think that would have a dramatic effect on the pest’s ability to breed and to spread.”

He believes that adoption of mating disruption products will rise as affordability increases and people experience the effectiveness and positive impacts for themselves.

“Right now, there’s a little bit of a leap of faith to believe the effectiveness of this invisible tool,” Lange says. “The manufacturers and scientists are telling people, ‘OK, if you put this dispenser out there, it’s going to release a smell that’s going to confuse the males,’ and it sounds crazy because you don’t see any dead bugs. There’s a little bit of disbelief for some folks, myself included, but you just have to try and get over that hump. I think when farmers see their neighbors and other farmers experimenting with and using mating disruption, there will be more comfort around these products.”